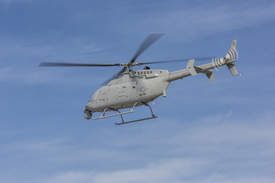 The OA included 11 flights totaling 83.4 flight hours where Fire Scout was tested against maritime and surveyed land targets to assess system performance, endurance and reliability of the unmanned helicopter.

The MQ-8C will provide twice the endurance and three times the payload as the existing MQ-8B.  It has a range of 150 nautical miles and a payload capacity of more than 700 pounds which provides unique situational awareness and precision target support for the Navy on land and at-sea with its multiple intelligence, surveillance and reconnaissance (ISR) capabilities.

The smaller MQ-8B, currently deployed on the USS Fort Worth (LCS-3), has flown more than 16,000 hours and demonstrated the ability to operate alongside the MH-60 manned helicopter during ship-based operations.

“The C model will greatly impact how we monitor, understand and control the sea and air space around small surface combatants,” Dodge said.

The MQ-8C has logged 427 flights and more than 730 flight hours to date.  Initial ship-based testing is scheduled to begin in fiscal year 2017.

The MQ-8B can operate from air-capable ships with deployments on Guided Missile Frigates (FFG) and the Littoral Combat Ship (LCS).