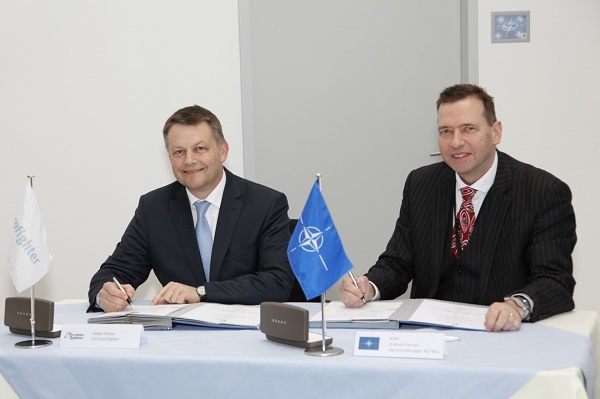 Eurofighter Jagdflugzeug GmbH and NETMA, the NATO Eurofighter and Tornado Management Agency, have today signed an Agreement to streamline the Type and Airworthiness Certification process and reduce the workload on Nations and their Military Aviation Authorities.

The Agreement, signed by the General Manager of NETMA, Air Vice–Marshal Graham Farnell and the Chief Executive Officer (CEO) of Eurofighter Jagdflugzeug GmbH, Volker Paltzo, will allow the attribution of privileges to industry to carry out certification work previously done by the Customer.

Eurofighter’s CEO, Volker Paltzo, said: “The idea for adopting EMAR21 into the Eurofighter Programme came from the Ministerial Task Force for Eurofighter-Typhoon. It makes a great deal of sense on many levels. Qualification and Certification activity, by its very nature, takes time. Sharing and delegating a common standard of approval will bring new efficiencies into the Programme. This is a significant step forward for a Programme that is already delivering a world-class product.”

NETMA’s General Manager, Air Vice-Marshal Graham Farnell, said: “Participating Member States have agreed to introduce EMAR21 into national regulations and under that rule to share a common certification process that also includes a delegation capability to other partner nations and industry. What this initiative does, is to take a sensible look at where common standards can be mutually agreed, and then put in place the most efficient approval process possible to secure and maintain those standards. It is a powerful step forward for a Programme that is already providing the backbone of European airpower and one which is continuing to grow and develop.”

Prior to the signature of the Agreement, the Eurofighter Programme required a four-nation agreement concerning Type and Airworthiness Certification for any changes to the Weapon System, limitations to, or modification of, the Type Design – in a stepwise approach. In the future, under a phased programme based on using EMAR21 in national regulations, agreed areas of work will be carried out and certified by industry based on the privileges granted by the Nations. Further updates may possibly be introduced at a later stage which will allow the same principles to be applied to repair work.