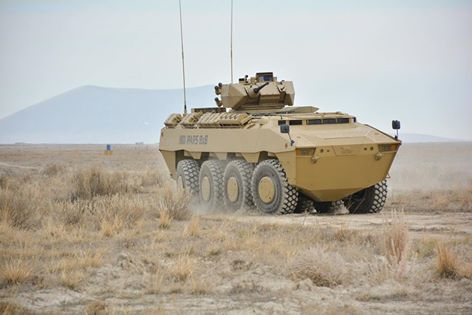 Turkey’s leading land based defence systems company FNSS, has achieved another success with its PARS Wheeled Armoured Vehicle (WAV) family. Recently FNSS was awarded a contract to supply the PARS WAV to a new customer.

The contract is already effective and FNSS has started to fulfill its obligations under this new contract which includes delivery of a series of vehicles in various configurations. The exact customer, vehicle types, total budget and additional details will remain confidential.

In 2011 FNSS has achieved the highest export value among the Turkish defence industry based on a single contract with the Malaysian AV8 program.

“This latest success for the PARS vehicle family, which has become a world standard in 8x8 and 6x6 wheeled armoured vehicles, has once again highlighted the status already achieved by FNSS on the international market. In competition alongside the world’s other top companies, FNSS has once again demonstrated the real quality and value of its vehicles, securing the highest scores in both the technical and value domains. We will continue to maintain our customer’s satisfaction at the highest level by meeting the contract requirements in terms of the schedule, budget, and quality”, says K. Nail Kurt, General Manager and CEO of FNSS.

PARS is the new generation of wheeled armored combat vehicle (WACV) designed and developed by FNSS Savunma Sistemleri A.Ş. PARS has been developed with a special emphasis on mobility, protection, payload, and growth potential. The vehicles employ the latest designs and technologies with special emphasis on the performance and durability of modern military operational requirements. The vehicles are available in 6x6 and 8x8 configurations. FNSS has named the vehicles as PARS which in Turkish means “Anatolian Leopard”.

Pars 8x8 is fitted with independent air spring suspension. Hydro pneumatic suspension system is still an option for the user.

The power pack is located at the rear of the driver between the first and second axles. Left side located powerpack leaves an aisle on the right side for the commander and driver cockpit to access the rear troop compartment.

The vehicle is provided with roof hatches and a power operated ramp at the rear and in addition there is an emergency hatch at the right side of the hull between the first and second road wheel stations.

11 to 13 personnel can be carried, depending on the role and the weapon system fitted on the vehicle. Foldable blast attenuation seats are used for crew and dismounts against mines and IED threats.

Powerpack consists of a water cooled 550 hp diesel engine, coupled with a fully automatic transmission which gives a maximum road speed of up to 100 km/h.

PARS is fully amphibious being propelled in the water at a speed of up to 8 km/h by two water jets mounted one either side of the hull at the rear. The driver can deploy the trim vane at the front of the hull, activate the bilge pumps and activate the water jets without leaving his position.

The PARS 8x8 has an effective all wheel steering system that is equally well suited to high-speed highway driving or manoeuvring in tight narrow urban streets. All of this high performance steering capability is done simply and automatically for the driver and is transparent to him in the operation of the vehicle.

The vehicle can be fitted with various weapons systems depending on the user requirements.

The PARS vehicles feature a distributed electrical computing system made up of electronic control modules interconnected by a SAE standardized CAN bus technology for high-speed and high-resolution data transfer. The entire electrical system is an over-current protected solid state system without fuses