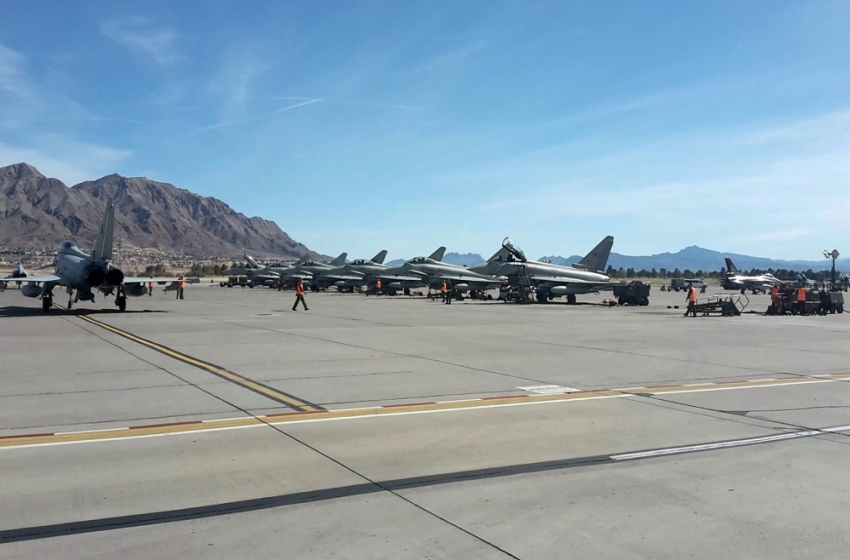 Italian Air Force Eurofighter Typhoons have this week made their first appearance at one of the world’s best-known military exercises.

Exercise Red Flag, at the Nellis Air Force Base in Nevada, is a realistic combat training exercise involving the air, space and cyber forces of the United States and its allies.

Eight Italian Eurofighter Typhoons, from the 4th, 36th and 37th  Fighter Wings in Grosseto, made their inaugural appearance at the Base, led by Detachment Commander Marco Bertoli. They are taking part in a series of exercises along with 76 other aircraft exploring different combat scenarios, utilising a military training area with more than 15,000 square miles of airspace.

The Nevada Test and Training Range (NTTR) is the U.S. Air Force’s premiere military training area and the Exercise will provide 1,900 possible targets, realistic threat systems, and an opposing enemy force that cannot be replicated anywhere else in the world. Nellis  AFB  and  the  NTTR  are  the  home  of  a  simulated battlefield,  providing  combat  air  forces  with  the  ability  to  train  to  fight  together  in  a peacetime environment, and to survive and win together.

The responsibility for executing Red Flag lies with the 414th  Combat Training Squadron. Aircraft depart Nellis twice a day and may remain in the  air  for  up  to  five  hours.

The Italian Eurofighter deployment to Red Flag is just one of a series of deployments all around the world for the Eurofighter Typhoon community, which have involved the multi-role swing role combat aircraft recently. Others include:

In total more than 470 Eurofighter Typhoon aircraft have now been delivered and the total fleet of aircraft across an active customer-base of six international operators has accumulated more than 330,000 flying hours with unprecedented levels of reliability.