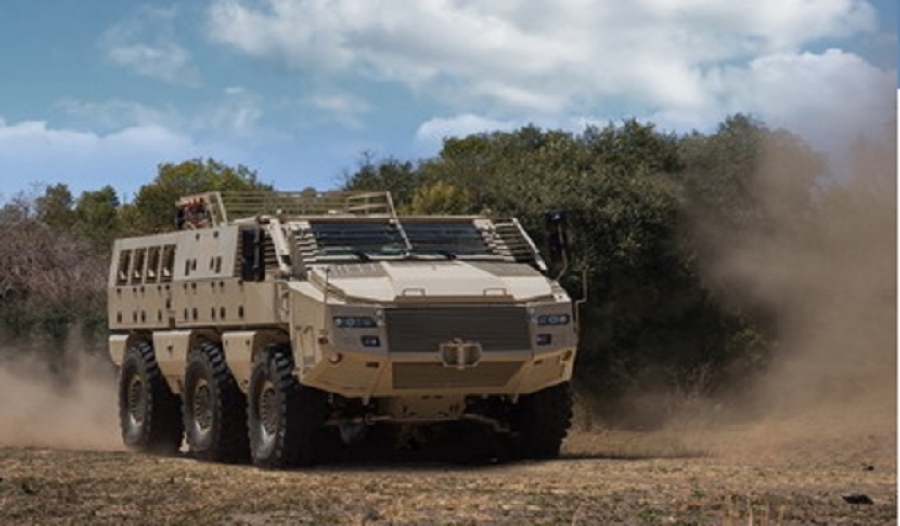 Jordan has begun the process of establishing local production facilities for Paramount Group’s 6x6 Mbombe armoured vehicle for the Jordanian Armed Forces.Paramount Group and Jordan Manufacturing Services Solutions (JMSS) announced the signing of a new contract that will see JMSS leading on the local production and assembly at a dedicated facility in the Dulail-KADDB Industrial Park, Paramount announced during the Special Operations Forces Exhibition & Conference (SOFEX-2016) in Amman, Jordan, today.Paramount has partnered with JMSS and the King Abdullah II Design Development Bureau (KADDB) on the Mbombe, with the partnership to deliver 50 vehicles to Jordan’s military. Paramount Group has been producing the first Mbombes in South Africa and the process of vehicle delivery has started with the first 25 vehicles expected to be delivered to Jordan over the summer of 2016. JMSS and partners will start immediately fabricating the jigs to build Mbombe hulls before producing the second tranche of 25 armoured vehicles in Jordan. The proposed build will require them to fabricate the hull assembly as all welded sub-assemblies and cut and bend plates will be delivered by Paramount Group. The bolt on assembly will be done in Jordan, as with the major sub-assemblies like the power pack, wheel stations, suspension and hatches. Additional local partners who form part of the supply chain include the King Abdullah II Design Development Bureau, the Jordan Advanced Machining Company (JAMCO), which will manufacture the turret and pestle mounts, and Aselsan Middle East, which will provide intercom systems.

Ivor Ichikowitz, Founder and Executive Chairman of Paramount Group, said that, “Industrial partnerships are a hallmark of Paramount Group which has a proven track record of providing clients with sophisticated, affordable and adaptable security solutions. “We are extremely proud to expand our collaborative partnerships with local Jordanian industry, working together to bolster local industrialization, creating advanced technologies and skilled jobs. It is an honour to collaborate on the production of the Mbombe 6x6 for the Jordanian armed forces and I am committed to developing further such partnerships across the Middle East.”Dr. Eng. Khaled Tashtshe, General Manager at JMSS said that “JMSS is a regional leader in manufacturing medium and heavy vehicles, recognized for its technical excellence. We are proud to play a leading role in the local production and assembly of the Mbombe armoured vehicle.”Paramount will also deliver vehicle maintenance training courses for Jordanian employees of JMSS and members of the Jordanian armed forces.Ichikowitz added: “Regional governments are working valiantly to confront security threats of unprecedented scope and scale in an era of squeezed military budgets. But they cannot do it alone. Regional security starts with economic security and the defence industry must accept the responsibility of offering more affordable, adaptable solutions. “As a South African company, with a proven track record of providing solutions to stabilize asymmetrical warfare, Paramount Group is a trusted partner to governments across the Middle East. “Paramount Group is privileged to play our part in supporting the growth of the Middle East’s military industrial capability, and we look forward to announcing further such collaborations in the future.”The Mbombe contract was first announced at SOFEX in May 2014. The Mbombe is a six-wheeled infantry fighting vehicle (IFV) featuring a flat-bottomed blast protected hull, giving a low silhouette of less than 2.4 metres. It has been designed for desert operations and can continuously operate at a temperature of 50 degrees Celsius, according to Paramount.It is designed to provide protection against landmines, IEDs, side blasts and RPG attacks, with mine protection to STANAG 4569 level 4a and 4b without resorting to the traditional V-shape hull design. Maximum speed is 100 km/h and road range is 700 km. Power comes from a 336 kW turbodiesel.It can be fitted with a heavy machine gun or automatic cannon/remote weapon station (up to 30 mm). Variants include armoured personnel carrier, command vehicle, 120 mm mortar version and anti-armour fire support vehicle with anti-armour missiles.As part of its participation at SOFEX, Paramount brought its Parabot to the show. The ten metre high, one ton Parabot is based on the Mbombe vehicle body. Icikowitz said, “Parabot is at Sofex to celebrate this important partnership between us and Jordan and to show solidarity with Special Forces across the region.”Jordan is not the only country to locally manufacture Paramount vehicles – Azerbaijan is making Marauder and Matador vehicles and Kazakhstan late last year opened a factory to make 200 armoured vehicles a year, starting with an indigenous version of the Marauder called Arlan (Wolf) and then the Mbombe.